Monday, 9 September, 2013
By Leandri van der Wat
I had the pleasure of being treated to a guided tour of Tribeca Coffee in Centurion by the charismatic Matt Carter and Ishan Natalie power couple. I was completely sold on the place and overwhelmingly jealous that people get to work in the coffee industry full time, like they do.

I’m currently a chronic student, fearlessly fighting off the convention to find a job and live life, well, conventionally. Being a student, I was more excited than I let on to get some coffee from Martin, “Just to taste,” he said. The moreish Tanzanian coffee from Moshi, has a distinct nutty and chocolate aroma, and has a winey, berry taste. 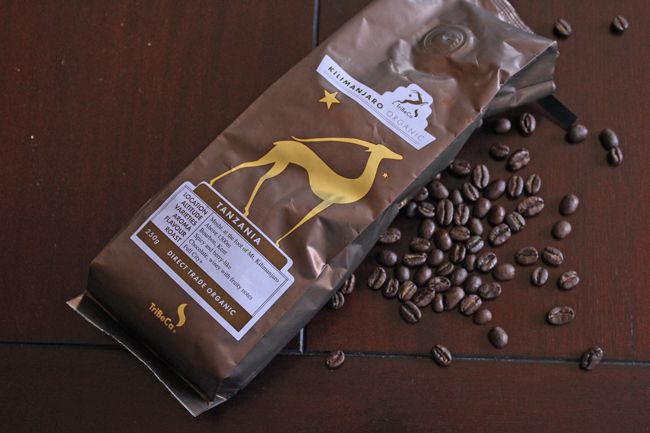 I had no trouble deciding what would pair perfectly with this coffee, and after consulting the trustworthy Eric Lanlard (yes the Cake Boy, Eric Lanlard), I got to whipping, folding and finally brewing.

To make the red wine gel:
This needed to be done first. I heated 250 mL merlot with 2 tablespoons honey, a handful of the Tanzanian coffee beans (whole) and half a teaspoon grated orange zest and added 1teaspoon agar. I brought it up to a gentle boil for a couple minutes, then removed it from the stove, strained it and placed it in the fridge. Once set, (it was rather rubbery and hard) whizz it up with a handheld blender until it is smooth and has a gel consistency.

To make the brownie:
I melted 200g of 70% cocoa chocolate, with 150g butter and 2 teaspoons vanilla paste. I did this in a glass bowl over simmering water, making sure the glass didn’t directly touch the water. Removing it from the heat once melted, I stirred in 150g caster sugar and left it to cool. Once cooled, I mixed in 3 eggs, followed by 75g plain flour, 2 tablespoons cocoa and 1teaspoon salt.
I then poured this mix into a greased tin and baked for 20 minutes at 180°C.

To make the meringue:
While the brownie was baking, I whisked 2 egg whites to soft peak stage. I then took 100g frozen cherries, and added 100g sugar to them. I heated this mixture up in a pot until the syrup reached 100 °C and then I picked out the whole cherries and set them aside. I then kept heating the sugar syrup until it read 121°C on the sugar thermometer and removed it from the heat, pouring it into my egg whites whilst vigourously beating the egg white mixture. I continued beating the mixture until it was cooled. It should be thick and glossy! I then folded the cherries through the mixture and topped the brownie with the meringue. I returned the brownie/meringue to the oven for another 5 minutes until the meringue just turns slightly brown.

Serve a slice of the brownie with a smear of red wine gel and freshly roasted nuts – I used pistachio nuts. And of course, a cup of coffee. 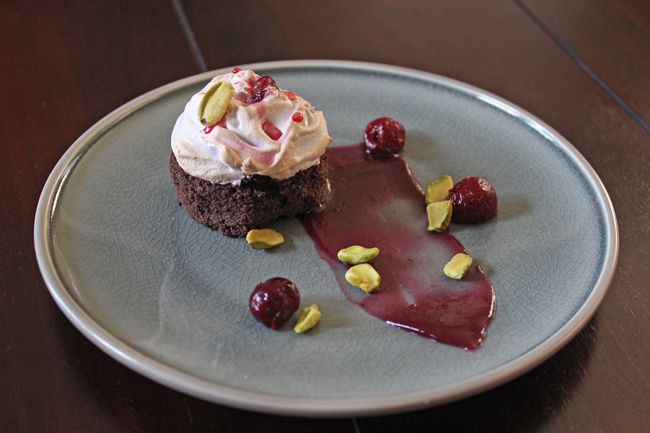 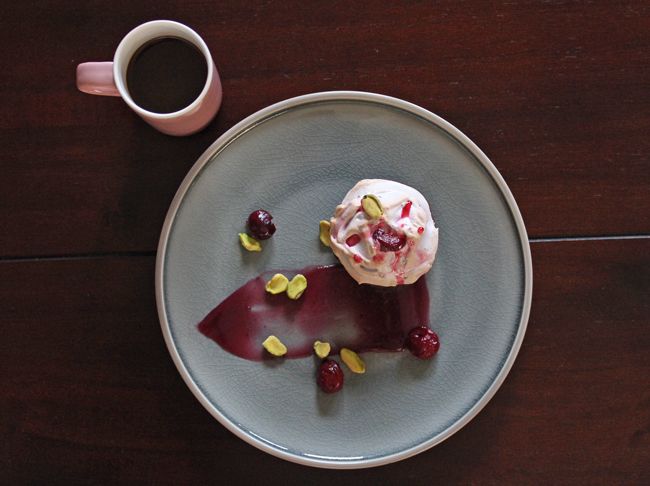