All words by Christopher Gevers.

This review has taken a long time to write, and not because of ‘writers block’. Rather it’s because the following words do not come easy to this particular writer: Melbourne might be the best coffee-tropolis in the world.

There, I said it. It leaves a bitter taste in the mouth – and not a good espresso bitter – but its true. It’s not a conclusion I’ve reached lightly, nor without considerable reluctance. It was never my intention to add to the chorus singing the praises of our antipodean rivals. What is more, I reserve the right in the future to write a review of the things I dislike about Australia. However, I know when I’m beat and the simple truth is that I didn’t have a bad coffee in the week I spent in Melbourne, and not for lack of trying. To make matters worse, the Melbourne Coffee scene even has its own app (‘Melbourne Coffee Review’), its almost like they knew my weaknesses, Apple obsession included.

Of course I did not visit every café in Melbourne, although given another week of jet-lagged induced insomnia I might have, but I visited enough to know that the standard of coffee is excellent. The people of Melbourne simply don’t abide bad coffee, nor should they, given everything else they have to suffer through. The excellent cafes I tried out are too numerous to mention (I stopped taking names at some point), but a few left a lasting impression.

The first is Seven Seeds Café and Roastery in the CBD, conveniently located near Melbourne University. 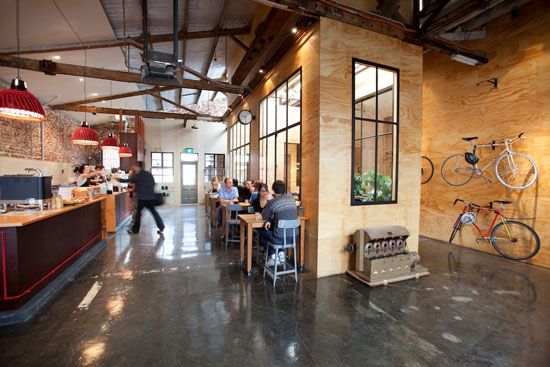 The name comes from the fabled 17th century Islamic scholar, Baba Budan, who is said to have smuggled coffee beans into India, breaking the 300-year monopoly the Arabic world had had on coffee since its introduction from Ethiopia in the 14th century. Legend has it that Baba brought the seeds back from a pilgrimage to Mecca ‘strapped to his belly’. According to Seven Seeds website, “Baba Budan’s crop wrested the monopoly on coffee production from the hands of the Arabs and started the global spread of coffee cultivation”. And, “because of Baba Budan and his determination to spread coffee around the world, we are now able to source beans from the Americas, Africa and Asia”.

Someone looking for a reason to be critical might bring into question the historical accuracy of the tale, or at least its good versus evil narrative. They might even point out that we in Africa were drinking and trading in coffee the whole time (thank you very much!) and that – Baba’s brave exploits notwithstanding – we did not need it to be discovered by Europeans (via India), exploited, and then sold back to us. But even that person would have to admit that whatever historical passage led to Seven Seeds sourcing coffee from far-flung places like Kibirigwi, and roasting it in an even farther flung place like Melbourne, they are doing it exceptionally well. They also have regular coffee cuppings for the enthusiast.

Seven Seeds is just one of many great coffee shops in Melbourne, too many to visit in one week of course. Two others deserve mention. I have it on good authority that Proud Mary in the trendy Collingwood district is a contender for best café in Melbourne. 
I must admit I wasn’t blown away by my ‘flat-white’ – which I’m told originates in Melbourne – but it was very busy and I was rushing to get to the airport. From my brief encounter however its clear that they take the coffee very seriously and they had a wonderful selection of brewing apparatus and coffee. A criticism that might be made about both Proud Mary and Seven Seeds is that their décor – exposed brick, faux-warehouse – is a little too manufactured, manicured even.

If you're looking for something a little less so, Atomica Café in Brunswick Street might suit you better. This small, cozy café roasts its coffee in a glass room in the back and pulls a mean espresso. I had two, just to be sure (and it was breakfast and I was jet-lagged). It was excellent: strong but not bitter, and very complex. I got the feeling that in a parallel universe, a less fortunate version of myself who followed the sirens call of the antipodean might even call Atomica Café home. 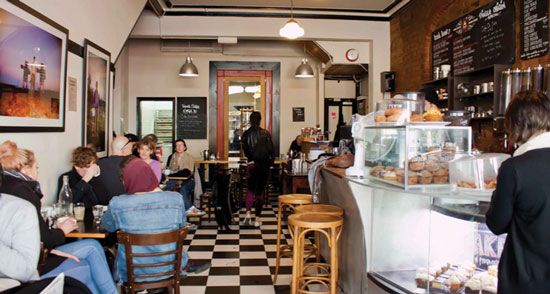 Melbourne is hosting The World Barista Champs in 2013. The culture there is obviously thriving, thank you to Christopher for giving us a glimpse down under!