Wednesday, 17 October, 2012
The Rwanda Cup of Excellence 2012
All words by Michael MacDonald

I was fortunate enough to participate in this years cup of excellence in Rwanda which took place from the 25th of August to the 31st. The Cup of Excellence is the most revered award given out for high quality top coffees. These awards come from a strict competition that selects the very best coffee produced in that country for that particular year. 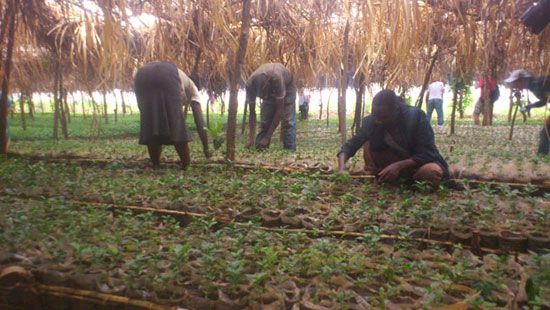 
The Pre-selection process reduces the number of entries to approximately 105 coffees through visual inspection and cupping analysis performed by the enthusiastic and persistent national cuppers of Rwanda. The pre-selected coffees are then cupped at least five different times during the competition process. Only coffees that continuously score high enough are allowed to move forward in the competition. The final winners are awarded the prestigious Cup of Excellence® and sold to the highest bidder during an internet auction.

Our home base was at a Hotel about 50km east of Kigali (a place of cold showers, dysfunctional toilets and beds that suddenly break while you’re sleeping-nonetheless it was a fantastic experience with great people .). It was about a 20 minute bus drive to the cupping lab. There were 17 international judges, 2 national judges and 6 observers( first timers to CoE) and consisted of coffee professionals( roasters, owners , buyers, etc) from the likes of the US, UK, Germany, Czech Republic, Lithuania, Norway, Japan, South Korea, Russian Federation, and Australia. This really added a layer of deeper perspective on these incredible coffees.

Also perspective on the quality of the aspects of a coffees profile might be slightly different dependent on the culture.( This does not refer to the method because of course there is a standard methodology behind coffee tasting.) Having a group of international judges analysing these top coffees creates a more suitable grounding for these coffees to be sold on an international level. For example the Japanese judges might perceive tartaric (Grape) acidity to give the coffee a higher quality overall as compared to a crisp malic (Apple) acidity. Having a crisp malic acidity might lead to a dry finish, and essentially a bad scoring on aftertaste depending on which way the perception of quality leans(this is only an example). The flavour aspects are all linked, which is probably the one most perplexing part of scoring coffee. Being a judge is being able discern between these differences and being able to choose which direction to lean towards with regards to the actual scoring.
These coffees were normally divided into tables of ten with four cups of the same coffee near each other( this is to check for consistency).

To give you an idea of what this cupping scenario was like-of the 40 cups on the table, at least 2 sips were needed of each cup. One to prime the pallet and the second to taste. We then had to taste the coffees as they cooled- this ended up being at least 6 sips of each cup, which amounts to 240 sips in one round. Spitting is important, unless you want caffeine poisoning. The duration of one round is an hour. After a round we would all head for the discussion room and the head judge-Sherri Johns- would accumulate and compare scores, and we would discuss the coffees flavour profiles and quality levels.

"Spitting is important, unless you want caffeine poisoning."

On the first 3 days we only had 3 tables a day, as there was an unforeseen problem-the power had tripped while the guys at the lab were roasting the competition coffees and on top of that the generator they had as backup also failed [welcome to Africa..hahahaha].

This unexpected problem took a little while to get sorted out, and so the amount of coffees to be cupped piled up. On the 4th day , we had a couple of extra tables to squeeze in. We did 50 coffees then- the most I’ve ever cupped in my life in one day.

Clarity of thought became difficult at the 5th table( the last table of that day…. Everything became mechanical. Slurp…spit……slurp again….spit….brief ponder…..seperate aspects of profile…….record…..double check……move on( it’s very important not to over-analyse). In this state of mind, coming across an exceptional coffee is like seeing an annoying ‘pop-up ad’ on a computer screen after staring at it for hours, except that in this situation it’s not annoying...it’s the complete opposite.

Want to learn more about cupping? Origin Coffee Roasting runs courses and we are still running a competition to win a cupping experience.