What does coffee have to do with the Olympics you ask?

Thursday, 11 August, 2016
Words by Iain Evans
What does the Olympic games have to do with coffee, you might ask?

In 2004, I represented South Africa in the Athens Olympic Games. I was part of the Men's Hockey team that managed to qualify (Just - but that's a story for another day!) and to be sent to the Games (unlike in 2000 and 2016 where our politicians scuppered the Hockey Team's participation despite qualification - again another entire chapter), so I was very, very lucky to find myself standing in the Olympic Village, on a sweltering August morning, looking down the Olympic Avenue, lined with the hundreds of flags of all the participating countries, dressed in our Team SA Olympic Gear with 15 of my team mates, and 89 other South African Athletes.

It seems like another life. Another world. A surreal memory or a dream. Except I know it happened. I know this, because so many people close to me were there to share it too - my brothers, my folks, my teammates, 10 000 other athletes, many of them superstars in their sports. We ate meals together in the dining room. We stood in the massage queue together. We lazed by the pool or played table tennis in the village games rooms. Regular things. With very unregular people! 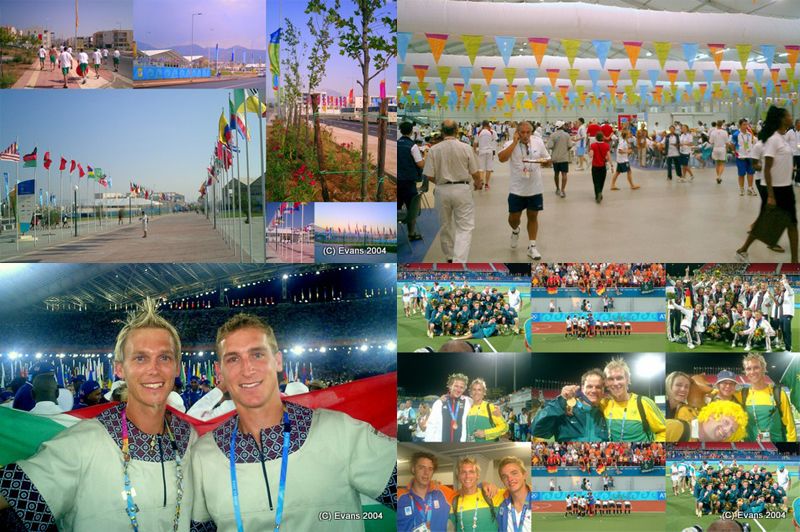 Standing with my brother, Steve during the Opening ceremony. The Olympic village with all the flags, the dining room, and photos with fellow athletes!


I remember one afternoon, catching one of the many buses that ferried us around the Olympic Village, when Chinese basketball player Yao Ming stepped on board. He didn't fit into the bus standing! He's 2.29 metres tall!

I remember waiting in a short queue to collect our laundry, chatting to this tiny little French guy. "What's your name", I asked. "Richard" he replied. "I'm a cyclist". Turns out it was Richard Virenque, who just 2 weeks earlier, had won the Tour de France's King of the Mountains for a record seventh time! There he was, a superstar, but also just another guy, there to compete and do his best. And collect his laundry.

I remember meeting Wickus, a swimmer from Swaziland on Day 2. He had qualified for just one event, the 100m breaststroke. "How was your heat today?" I asked. "I came stone last" he replied. I expected him to be upset and being knocked out of the competition on Day 2, but instead he had a huge grin on hits face. "Look at this!" he said "I've got 3 weeks to still be part of this amazing event - all my heroes are here!" and he held up his Athletes accreditation with a cheeky grin.

I also remember eating breakfast one morning with Ryk Neethling, who was bummed because Australia's Ian Thorpe had just snaked the girl he'd been after! (Sorry Ryk!)

And that's the thing about the Olympic Village. Everyone in there is at the top of their profession. Everyone is an athlete, with a certain skill set that puts them in the top 0,000001% of the human population, and because of that, everyone is pretty much chilled and cool to hang out.

Besides the obvious parallels between the Barista Competitions and the Olympic Competitions in all their various formats, the subtle motivations are perhaps the most important. The striving to produce a perfect routine under pressure, to impress the judges, to beat the clock and to produce the perfect set of coffees is one thing. But in my mind it is the intention behind the Competitions. Not just the desire to push the performance bar higher, but as in the Olympics - in the taking part, the inclusion, the sharing of experiences and knowledge, in unifying people of different languages, races and cultures under one family. The Olympic Family. The Coffee Family. 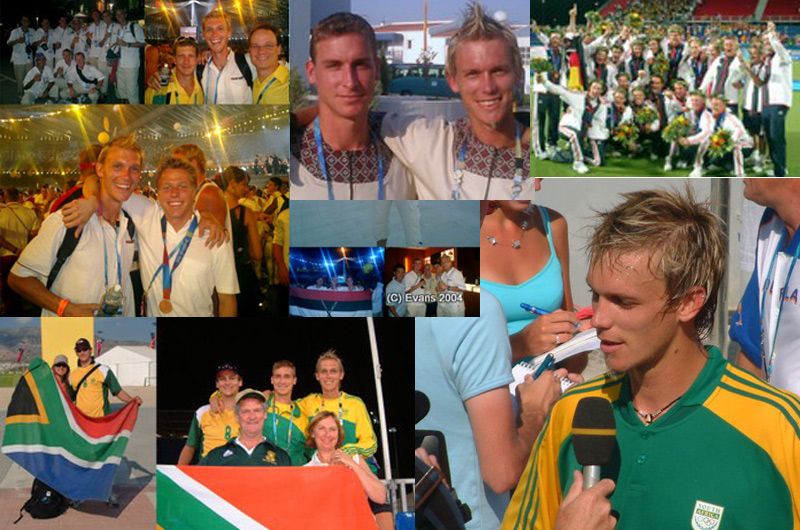 Special moments with my Family, friends, supporters and other athletes.
Steve getting interviewed for TV after a game.

And because one of the themes of the Olympics is this theme of family it was very special for me to share the 2004 Games with both my brothers. Steve, my eldest brother, was part of the team with me. And my middle brother Geoff, who came along with my folks to support, is probably the reason I was at the Games at all, since it was he who pushed me to compete at everything since we were little boys, playing our own versions of the Olympics in the back yard every moment we had. Steve scored one of our greatest goals in the Pool game against Multiple Olympic Gold medal winners Holland, and his goal celebration became one of the iconic Olympic moments, used by SuperSport in an ad for years to come…where he ran to the side of the pitch, got down on one knee and used his hockey stick as an archery bow to shoot an imaginary arrow to our friends and family in the stands!

Those 2 weeks of competition were grueling to say the least. The conditions were hot, the competition was fierce and, I think what stands out for me most within our Hockey Competition from that Olympic games, which I think applies to all sports and especially to coffee competitions is this: The margins are so, so incredibly tiny between winning and losing. As Al Pacino says in his famous Any Given Sunday speech…

"One half step too late or to early, you don't quite make it. One half second too slow or too fast and you don't quite catch it. The inches we need are everywhere around us. They are in every break of the game every minute, every second."

and that was so true for us. We started off with a 2-1 win against Argentina. The we were 2-0 up against India and Australia and failed to close out the matches in the dying minutes, losing 4-2 and 3-2. It was devastating. We should have had 9 points and been top of the Group by the end of the 3rd round. Instead we had 3 points and we were psychologically shattered. We lost 5-0 to the Kiwis the next day as a result and finished in the bottom half of the play-offs.

So let's bring this back to coffee…You know who else was an Olympic athlete? World Barista Champion of 2015, Sasa Sestic. He played handball at the Sydney 2000 Olympics. When I was watching his documentary The Coffee Man earlier this year, it all made sense to me. His approach to coffee was like his approach to handball. Practise, training, mental toughness, desire to win, knowing his equipment, his expert coaches. When Sasa got sick in the semi finals round of the WBC2015 and had to go to hospital, he bounced back through sheer determination and an IV drip. His brother Dragan said "In handball, if you take the field, then you are not injured" And that was the Sestic approach to WBC. more people need to watch that documentary!


Every time I stand alongside the stage of the local barista competitions, it's a microcosm of the Olympics for me. It's like being there all over again. The same nervousness, the same feeling of excitement. The same sense that everyone who is there is there because they love coffee - no matter if they are a returning champion or a newcomer - everyone is welcomed, but one thing is the same - they all get 15 minutes and they all are equals on that stage. Most importantly, everyone leaves with more knowledge, new friendships and emotional experiences. I loved competing on the hockey field, I still love it and …who knows, maybe one day I'll don the apron and I'll have my 15 minutes. "Good day Judges…My name is Iain and today I'd like to share a special coffee with you, and a special story behind it…"

Myself and Lucas Camareri from Argentina sprint for the ball during our opening match of the Olympics which we won 2-1. The Coffee Man film has landed!