Celebration of Women: Sarah Robinson of Bean There She has a nose for adventure, a file with the FBI and a habit for finding accidents; Sarah Robinson is forging a path through the South African coffee industry with integrity and passion. At a conference in Nairobi, held by the International Women’s Coffee Alliance (IWCA), her principles were challenged by some new questions and what it means to be a woman in the coffee industry. She is facing them head on with Bean There Coffee Company. “We’re always trying to do better and be better, and I just feel that this is one of those things where we have an opportunity to really do better and be better in the way we do things.” Sarah is talking about making a difference to the way women are treated in the coffee industry, right from the roots at the coffee farms throughout the process. She attended a leadership training conference for women in coffee that really opened her eyes to the plight that women, especially in Africa, face on a day to day basis. “I’ve never been a feminist, I mean I think we should be equal, but I’ve never been big into women’s rights. Being at this conference really challenged me.”

Sarah is not one to shy away from a challenge. Her brother Jonathan, challenged her to join him in building a coffee business with him, while he was still roasting coffee from his garage. She was studying Political Science in Canada at the time, but decided to come home at the opportunity to help her brother. Never one to be under-prepared (except when it comes to planning holidays), she decided to arm herself with a solid coffee education. Naturally this meant getting a job at Starbucks. This is not a joke! She is very serious about the merits of the Starbucks company.
“They train you for three months before you’re officially hired. It was a really good grounding in coffee. And they pay some of the highest prices for their beans. I mean they (Starbucks) were innovators, if it wasn’t for their flavoured lattes we wouldn’t have a cafe culture.”
She maintains that while they receive mostly bad publicity, at their core they have strong values and quality matters to them. Whatever the popular opinion of Starbucks now, it obviously got her off to a great start. Working for a successful company also gave her a lot of insight into what made it work and how she could translate that to a South African context.

Jonathan and Sarah had big plans for the business. It’s not just any coffee business, Bean There Coffee Company was the first fully FairTrade certified coffee roaster in South Africa. Together they built a business that today supports farmers and communities across the coffee belt in Africa. “The reason that I love the FairTrade model is that it’s not prescriptive.”
What that means is that if the farmer wants to be part of the system, they have to tick all the FairTrade quality boxes and keep their standards high, but the rest is up to them. It is a business arrangement. The way the farmers choose to spend the profits that come as a direct result of the sales is entirely up to them. FairTrade does not dictate to the people how to live or how they achieve those standards. The ethos of Bean There has remained the same since the beginning and they still directly source all of their beans, travelling throughout the year to find the highest quality at the fair price. Their philosophy has always been to surround themselves with people that share their vision. They are passionate about learning and sharing that knowledge. They believe trips to origin are important and they’re in a position where they can share this experience with their staff because it transforms the perspective on what goes into bringing that coffee to South Africa. The treatment of the coffee has to change when you know the story behind the bean.

The team at Bean There really is like a family. Every person is important. Every person is invited to the braais at the weekend. Sarah treats each member of her team with respect and as equals. They love working for her.
In 2012 (Imagine what it's like now!) Sarah has had a busy year. A year most of us could stretch out over five. Rwanda. Portland. Malawi. Kenya. Mexico City. Still more planned for year end. All inbetween a lot of back and forth between Joburg and Cape Town.

Bean There’s second branch in Wale Street in the Cape Town CBD is a year old already (5 years old now!). They were determined to get it right, especially in the competitive Cape Town coffee market place. They found the right people and they did the right training. It has certainly paid off, the new branch is already keeping pace with the 44 Stanley original and holding it’s own in the CT scene.

Sarah was invited to attend the leadership conference by the International Women’s Coffee Alliance. The best thing about any conference is making connections and meeting new people. This one was different for Sarah, she saw a side to coffee that she had never investigated, but in hindsight can see that it has been going on all around. Sarah is now committed to empowering women in the international coffee community to achieve meaningful and sustainable lives; and to encourage and recognize the participation of women in all aspects of the coffee industry.

The statistics are staggering. 80% of the labour is conducted by women but they only see 20% of the money earned from that labour. The stories on the ground are even more alarming. Traditionally, while the men run the co-operatives and attend the meetings with the buyers, the women are doing the legwork. Literally. This is the culture and while Sarah is not proclaiming Bean There an NGO or heading down the path of a missionary to try to change the world, the glaringly obvious inequalities need to be addressed. A comment that really stuck with Sarah at one of the talks during the conference, was from Meg Jones of the International Trade Centre.
“If you want to develop Africa, you need to put the income in the hands of the women, because they spend that income on education and health.”

The farmers at the conference had never tasted their own coffee. Education at conferences such as these will take their coffee to new levels of quality. Teams from Sustainable Management Services now train the women separate to the men, ensuring that the women feel comfortable to ask questions and assert their opinion. This has seen a marked increase in quality in the Nyeri region of Kenya where the project is based. The Kenyan government is in the process of employing a new business law that requires a third of the leadership roles be filled by women.

“We always have a list of questions we ask the farmers, there are definitely new questions to ask with regards to equality. We’ve got to start the conversation.” 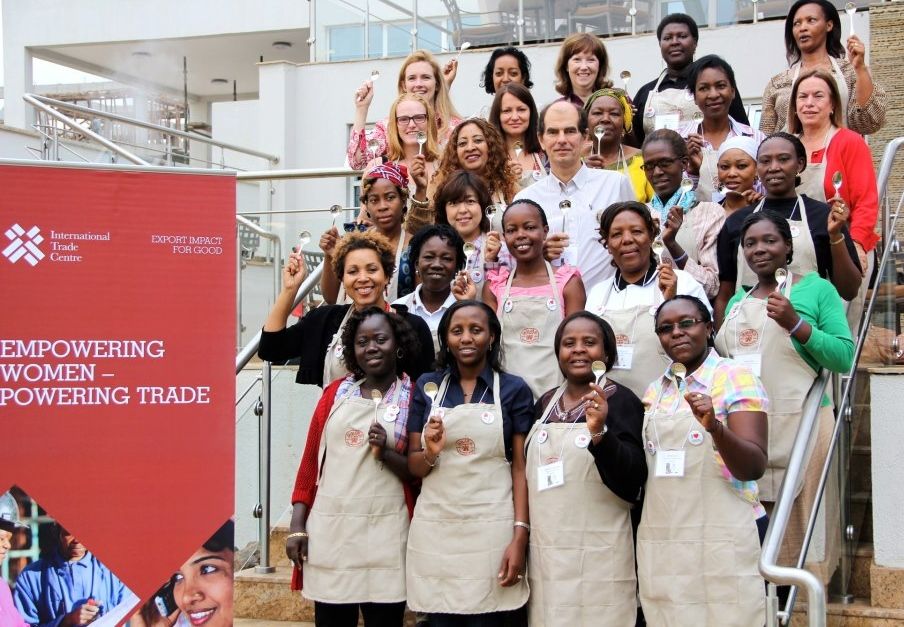