Getting fixed in London: Part 2

There is a certain guilty satisfaction derived from mixing business with pleasure, which is now so much a normal part of my working life I’ve stopped feeling bad about it. For the last 5 years I’ve worked in and out of many, many coffee shops. It seemed fitting then that my first business meeting would happen in a coffee shop in Camden. Colourful and complicated, Camden remains a great place to buy shoes and hats you’ll never feel comfortable wearing anywhere else but in Camden. Thankfully in amongst the pubs and vendors of all things that can be bought and sold with a slightly punk or gothic origin, there is an amazing coffee shop. The Camden Coffee House is located just down the road from The World's End. There is nothing quite like the eerie sounds of Iron Maiden spilling out onto the pavement in broad daylight. The World's End has to be one of the scariest Rock pubs I’ve ever been to. I popped in there at noon and felt my spine tingle as the gothic bar maid licked her blackened lips with a multi-pierced tounge like a vampire contemplating her pray. I was petrified, but that is a story for another day. Entering The Camden Coffee House one retains that slightly creepy Camden feeling, but it is equal parts creepy and friendly due to the aged barista who looks like he has dropped a cap of acid every day since The Clash were roaming the neighborhood and playing gigs at World's End up the road. How was the coffee? For me it was a friendly voice of reason in the punk wilderness of Camden, an olive branch of optimism amongst the black roses of London’s punk central. For a Camden Coffee House, they sure have a lot of tea. Note the LaMarzocco in the background.

Quite how I found myself in Covent Gardens when I was trying to be in Battersea I’ll never know, except to say that the London Underground is a magical thing if you know how to use it. What a happy mistake! I co-incidentally recognized the name that had been recommended to me by another epicurean friend of mine and dived right in. As you walk in the door on the right there is a huge sign that states clearly “10 000 hours”.

To the left is a pumping bar counter and in the window sits a drum kit waiting for Lenny Kravitz to walk in, sit down and start banging a tune. Prufrock is the kind of place where that could happen. Once again I fall in love with another blue haired barista. Her boyfriend is from Cape Town, so we have something to talk about while she uses the benefit of the 10 000 hours to build me one of the most extraordinary cappuccinos I’ve ever had the pleasure of wrapping my lips around. Complex, but humble, full bodied but not overpowering. In a word ‘delicious’. I really didn’t want to leave. I wanted to move in, I wanted to become part of the furniture, I wanted to learn how to play the drum kit and I damn sure wanted to drink more of their coffee. If you ever have the pleasure to stand in front of Van Gogh’s ‘Sunflowers’ at the National Gallery you will see from a mere 30 unprotected centimeters the fine work of his brush as the troubled artist assembled this simple but amazing masterpiece. For nearly an hour I looked at a wall of Van Gogh paintings mesmerized by the genius of the man, contemplating the 10 000 hours that he had put in and how little in retrospect he got out. It was not hard to guess my philosophical conclusion that life is just not fair. There is so much art in the National Gallery that there is no way you could see it all in one day. After my hour with Van Gogh I was ready to go for a walk outside. I didn’t want to tarnish the experience by overdoing it. I got lost on the way out and searching for the exit by pure chance walked into a gallery of Turner’s works. They stopped me dead in my tracks. Though I’d sworn to myself to leave and not ruin the experience of the Van Gogh’s, Turner’s work held me captive. The way he painted the ocean, his understanding of light and the scale of his work was spellbinding. I couldn’t leave. I spent another hour absorbing another genius. When I walked out into the watery autumn sunshine I wandered aimlessly, not really with any destination in mind. My mind picked up the message that we were walking past ‘adult’ shows and such like, that told me I was in Soho, but the melancholy of Turner and Van Gogh lingered. Turner with the angry security guard protesting my photography.

London is equal parts grandiose historical splendor, modern trendiness and downright sleaze. In amongst the Thai restaurants, laundry services and adult bars of modern Soho there is a little princess called Flat White. Pure vitamin B for the brain and the perfect anti-dote to the come down of standing in front of the work of real artistic greats. I found myself ordering a ‘flat white’. The velvet, full cream entry, into a robust and athletic dark-grind-brew to just this side of bitter, was like electro-shock therapy. As the caffeine fired through my system, the sun came out and I promptly walked across the road and bought a sterling silver skull bracelet to remind me that life is not fair and that there is beauty sometimes in the strangest things. As I walked out of Soho back onto Oxford Street fastening the silver skull bracelet around my wrist, the taste of Flat White mixed with the memory of Van Gogh and Turner and I marveled at the depth of what London has to offer if you just dive in. 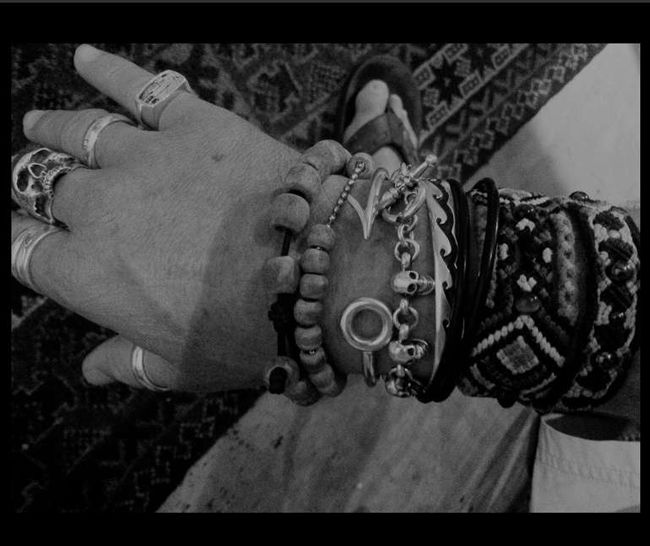 The skull bracelet as reminder.


The Scandinavian Kitchen – the one that got away!

On my return to South Africa a London friend pointed out that I’d missed The Scandinavian Kitchen in Great Titchfield Street. How, I’m not sure, because I must have been walking right past it daily! Anyway he swears by the food and the coffee and let me in on a little secret about their unique loyalty program. After 5 cups of coffee you get a hug from the waiter or waitress of your choice. How is that for sharing the love! After all isn’t that what this whole modern coffee movement is all about? Take me to London Town