How To: Brew a Chemex with Waseem

Wednesday, 13 May, 2015
Read one man's journey towards the perfect Chemex and see if his method works for you at home! 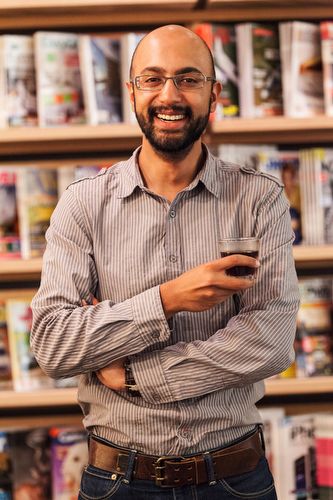 Go visit Waseem at EB Cafe in Rosebank Mall! Or try his method at home!

So until about a year ago, I’d never even heard of the Chemex. I had been grinding at home and brewing in a plunger (still my first coffee love…) with varying consistency and success, but always with sediment, bitterness, and the need for milk. Thanks to Andy and Regardt from Legado, I was introduced to what became a truly revelatory experience for me – black coffee that was light, clean, and sweet! Even when we opened the first EB Café in August 2014, I had yet to brew a Chemex myself. But when I did, it opened the door to a whole new obsession and daily search for perfection; anytime was Chemex time! I’m no expert, but this is how I Chemex: 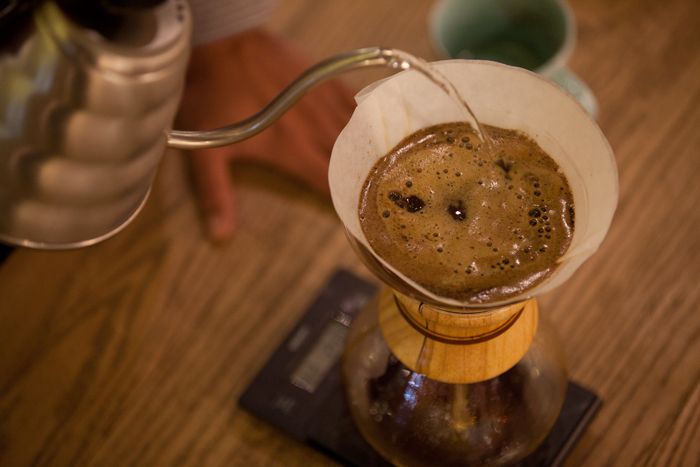 • With almost all coffees, I find that 60g of coffee to a litre of water as a base ratio to start off with works just fine in terms of getting a decent, balanced brew. When I Chemex for all of us here at the café I usually do 45g coffee and 750g water, but often dose up or down by 5g depending on the coffee – this is totally personal preference and it’s always fun to play around with the dose to find what you like.

• Another variable that I play around with is grind size, and most often I start off with a medium to coarse grind, around 50 – 60 on the grinder (or a filter setting on a home grinder).

• I must admit that I’ve never (although I probably should) measured water temperature for my Chemex brews, I just fill up a pouring kettle from the hot water spout on the espresso machine, which means that the water’s probably around 90 degrees Celsius when I start brewing.

• I usually put the paper filter in the Chemex and pour water over to moisten it, as well as to warm up the Chemex. I then weigh out the coffee I need, purge the grinder with a few beans, and pour the water out of the Chemex. I cheat a bit by using my fingers (only after I’ve washed my hands, obviously…) to push the filter in to the neck of the Chemex, all I’m going for is to make sure that there are no gaps between glass and filter (except at the spout), and that its evenly spread all the way around.

• After putting the empty Chemex on the scale and taring it, I then grind the coffee and pour it into the filter as evenly as possible (no clumps!) and tare the scale again once I’ve hit my target weight of coffee, in this case 45g. If I haven’t added the coffee evenly to the filter, I also often pick up the entire Chemex and give it a little shake to level out the coffee.

• I then tare the scale again, start the timer, and slowly and evenly pour enough water (about a tenth of the total mass of water to be brewed, although this can also vary depending on the coffee and grind size) to evenly saturate all the coffee without any actually brewing through. I pre-infuse for around thirty seconds, but sometimes a little more or less depending on what the coffee is doing.

• I go for my first pour after pre-infusion, aiming for concentric circles from the centre outwards, whilst also making sure that all coffee is always evenly moistened, with as few “islands” or light spots as possible. I also try to spend as little time as possible pouring along or directly onto the filter, thus encouraging as much brewing through the bed of coffee as possible. If I’ve done it right, my biggest concentric circle should be reaching the paper filter as the level of water has risen to this point. What I’m looking for is an even, steady stream of coffee running out of the point of the filter, with no dribbling or dripping, and as little as possible water running down the sides of the Chemex.

• I usually aim to get to my total mass of 750g of water in four separate pours, with my first two pours being smaller in mass, and less vigorous, than my second two. I pour quite vigorously for my third and fourth pours as I find that the further agitation at this point churns up any coffee that may have clumped up in the filter. I also aim for my pours to be as evenly spaced apart as possible in terms of time, but this is also dependant on what the coffee is doing. I also pour a gram or two over my total weight in my last pour, as this is usually the mass that I lose to vaporisation. 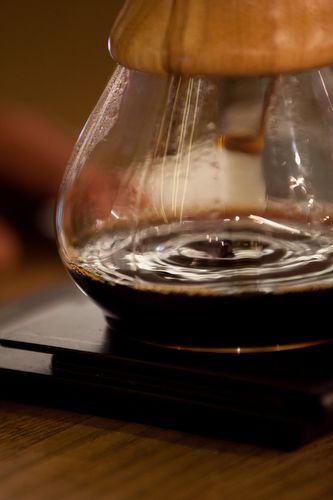 • I sometimes, after my last pour, pick up the entire Chemex and give it a firm tap on the counter, just to level out the bed of coffee and aid in getting an even extraction. This also helps to slow down (depending on how firm the tap is) the brew if it’s running too quickly. For a 750g Chemex I aim for the entire brew, from starting the timer at preinfusion to the last drop dripping through the filter, to take around six to six and a half minutes.

• Ditch the filter, pour the beautifully light and clean coffee, and enjoy! I find that coffee out of the Chemex tends to taste much nicer after it’s been allowed to cool for five minutes or so.

If variables like water temperature, grind size, coffee-to-water ratio, and brew time have been locked down for a specific bean, yet there are still differences and inconsistencies in taste between brews, then perhaps there’s something else that makes a difference to the taste. Without using every expletive in the book to describe how, this is where the Acaia scale has changed my entire (admittedly sad and lame) life! Not only is it a really cool standalone scale, but, coupled to the accompanying app, changed the game when it came to me trying to perfect my Chemex technique. To be able to see a visual representation of my pouring technique, on a graph of mass against time, has enabled me to isolate a further variable that could contribute to cup quality and taste. Different pouring styles may lead to different qualities in the cup, and I geek the hell out over specifics and detail, so this scale has been an absolute watershed for me in my search for the yummiest way to brew. Hopefully I’m able to find it, and consistently replicate it, and the Acaia scale might help me to do exactly that!

Don't forget to collect your copy of the quarterly print edition of TheCoffeeMag, just look at it, it's beautiful! Or subscribe so you can get the next one! How To: The AeroPress How to make a Pour Over with Daniel Thor Erasmus To Wet or not to Wet?