Thursday, 8 May, 2014
By Ishan Natalie
This trip was a team effort by The Woolworths Foodservices team, both Directors of TriBeCa Coffee, Dale Mazon and Martin Fitzgerald, myself and Surine who joined us for the SCAA leg in Seattle. Dale, Martin and myself started with 4 days in New York, then travelled to Seattle for the SCAA show for 3 days and finished off in Chicago for a day and half. I’ve been to Atlanta when I competed at the 2010 World Barista Championship, but all of the big names that we barista geeks in South Africa follow in the United States are mainly based in New York, Seattle, Chicago, Los Angeles and San Francisco.

My mission was simple: experience what the coffee culture is like in the States compared to South Africa. To be honest, I was expecting the US to outshine us as South African roasters/ coffee shop operators. Sadly, but also kinda great to experience, the reality didn’t live up to my expectations all that much. I had really good coffees, some better than others, but it was like drinking coffee at my chosen destinations/ from the beans I usually buy and try in South Africa. So stand up and be proud SA Roasters, we are not inferior to the rest of the world!

I randomly between all the places we’ve been, drank espressos, cappuccinos and pourovers mainly. Best pourover was from Intelligentsia, Best Cappuccino was from Intelligentsia! The espresso I drank at Stumptown proved to be quite sour for me, and I have become quite fond of an acidic cup of coffee; it just didn’t appeal to me. Intelligentsia impressed me the most, from store design, bar layout, barista skills, attention to detail and coffee quality; they were extremely accommodating, friendly and knowledgeable in their service and craft. I had great chats and service from most of the baristas but some of them made great coffee but didn’t know much about their coffee varietals when I asked them. Whilst the clean-as-you-go discipline was on the lacking side with some places, I was most impressed with the interaction with the baristas and myself, the customer (who pretended to be a general guy off the street) and their service levels through communication which is so underrated yet so important.

All of their manual brew choices of coffees were on a separate menu, and titled ‘Slow Bar’. This already gave me the impression as a customer that this is a very detailed slow process of brewing that required me to be patient, or order off the espresso based menu. I was also impressed that when ordering from the Slow Bar, the barista asked me if I had time or if I was in a hurry; again informing me that I need patience to order these style of drinks. I really appreciated that and quickly wondered if this would work in South Africa because let’s face it, South Africans are not the most patient and understanding customers in the world (no offence)!

Another interesting finding was that all of these great coffee bars were based on a ‘come up to the counter and order, pay and collect’ system, then find a table and sit down to enjoy the deliciousness. There were always queues, but all the customers were so calm and content. Milstead & Co was interesting in the fact that their Slow Bar brews were made with the Aeropress (#MoreFlavour), compared to everyone else who used drippers. However, all of them had all manual brewing methods/ equipment available but kept aside. I thought that the Aeropress choice was clever, as to me, it was a way of making manual brewed coffee, faster.
Counter Culture’s Training Lab blew me away! So sleek, rustic, well planned and well executed as a training facility. It is a fully interactive, multi station area which different brew styles per station/s. I immediately looked to Martin and Dale and said with puppy dog eyes “please can I have one like this”. We were welcomed warmly and with no issues of delving into what they do even though I introduced myself as a barista trainer and that I wanted to take pictures if they didn’t mind. We walked around and were really impressed with the setup; I really do want one like it!

The Event by SCAA in Seattle was a delight as always. There is always something new and interesting to see and bring back. The biggest trend at the show and currently, were one cup coffee/ tea brewers and new and improved water dispensing units for drip coffee. Also big were customised espresso machines, like the Slayer below; coffee porn for us coffee geeks! I wanted it all! I tried buying everything that I fancied, but unfortunately this time most exhibitors were not selling anything but rather showcasing their products. I did manage to come away with some awesome coffee t-shirts and SCAA books.

I really wanted to watch all the coffee competitions but I only got to watch a few competitors in the US Barista Championship. It was very inspiring to watch how cool calm and collected the competitors were, though there were many shaky and nervous like some of us usually are. It was interesting to see that most of the coffees used to compete with were from Central America and that the competitors spend time at these farms/ with the farmers, getting to know their coffee’s personality and also working with the farmer on influencing the coffee’s character specifically for competition through different growing conditions, cycles and processing methods. They are extremely lucky as I believe that they do this as its relativity cheap and easy to travel to farms if you are from a first world country.

All in all, it was a great trip which proved to be eye opening and informative. I came back to SA with a new inspiration, motivation and dedication to this wonderful craft that is a barista and in the pursuit of making coffee the best it can be. Cappuccino, pour over and macaron at Cafe Grumpy, New York Coffee V60 demo with Modbar Pour over Module at the Hario stand at The SCAA Event in Seattle. 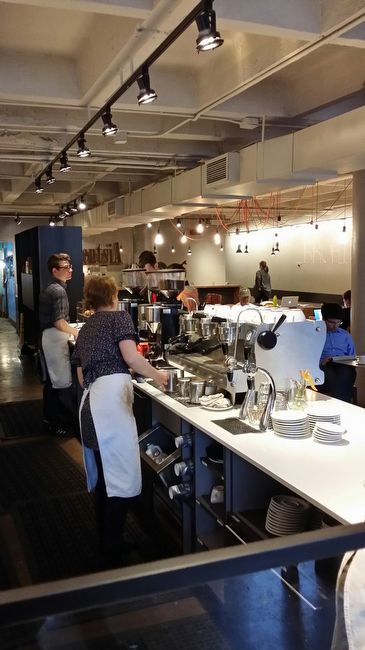 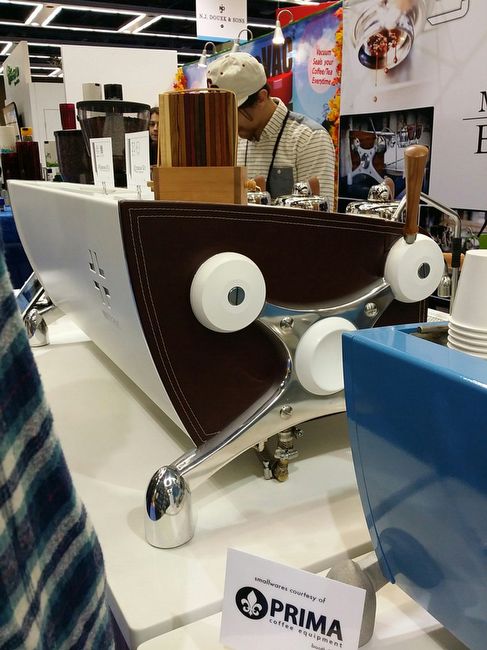 Customised Slayer espresso machine with leather exterior and wood detailing. At the Slayer stand at The Event in Seattle R&R: The Origin of the Blues Notes on an afternoon in Bali