Common Ground: Catch up with Craig Charity after the African Champs

Thursday, 20 February, 2014
So before we get into the adventures of your journey to Burundi, we'll ask the obvious question. You went into this competition the strong favourite, what happened? And how did you feel?

Although I ran through my set for the ABC, I don't think that I prepared enough for it. I started my set 15 seconds after I started my music, and when I was was speaking to the judges, nothing was correlating with what I had practised with my music. I also didn't finish calibrating my grinder before my set which threw me off quite badly. I got to a point in the set when I was too far gone and I had I knew I had crumbled under the pressure so I just served the drinks, regardless of the time.

What are the most important things you've learnt through this competition?

I think I gained more from pawning it than I would have from winning it, I might have become a bit complacent by winning, It has given me a kick up the butt for worlds. I was quite ill up there and was unable to see the coffee farms and washing stations but associating with the farmers and people closer to origin I have gained an even larger respect for that side of the industry.

Burundi uses mostly UHT packaged milk, tell us about your quest to source fresh milk for the competition?

I eventually found a milk I liked the taste of at the hotel, I asked where it came from and he told me a cow and in broken English with a French accent he said: "this morning, a cow" and proceeded to use his hands to demonstrate milking a cow. It was unpasteurised, unhomogenised milk. I tweeted Mat Perger and asked him what to do with it knowing I had to kill some bacteria without impacting taste too much. I ended up heating iit to 70 degrees C for 20 seconds and let it cool on ice to be re-steamed during my set.

Best moment of the trip?

The Best moments were seeing Ben and his family again and seeing how well they are doing with Long Miles. Also meeting Lauren who is now working for them. It is always refreshing seeing passion pay off. I also met Nathan from Cartel roasters in Australia which was inspiring. His cafe is so flipping busy and It gave me some new goals for my cafe.


Tell us a bit about the training you did up there?

I took the Burundi Barista guild headed up by Francis, a Ugandan Barista, through my 'there is no x in espresso' presentation. I had to leave quite a bit out. They don't have access to parts and accessories like we do here so telling them that they had to change certain things to get better coffee was not going to happen. Instead I spent quite a bit of time teaching them how to use their machinery to get the best out of their coffee. 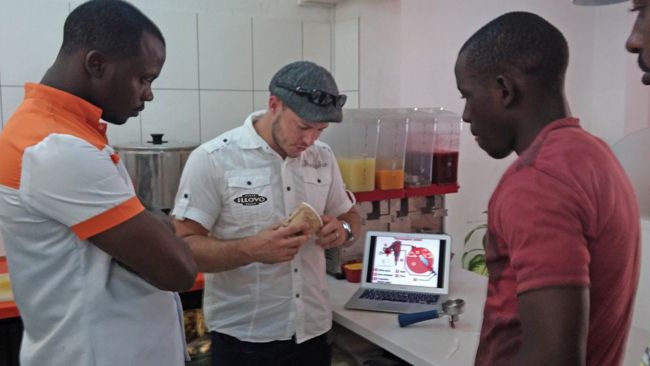 Training with the Burundi Barista Guild

Any interesting personalities that you crossed paths with?

Lauren Rosenberg from Long Miles Coffee Project, Nathan from Cartel Roasters, Andrea Simonelli from La Marzocco (funny I know-many a joke was said about that)

So it was a bit of a hairy experience all round, were there any silver linings?

I tasted a Burundi coffee from Counter Culture in the states. It was probably the best pour over I have had in my life, it was like drinking sweet berry juice. I am hoping that I am able to find a coffee from Burundi like that for the worlds.

We heard there was also a little bit of flooding…did that make travel interesting?

Lauren and I were being driven around by Ben's driver trying to get to the conference venue. I wanted to check on the machines to see if they had arrived. The main bridge from our side of town had collapsed on one side into the flood waters below. Many people died from the floods, mostly in the rural sector of the city. Traffic was at a halt before the bridge while they were assessing it so Lauren and I shared the back of a motor bike and the driver taxied us across the flooded road. On the way back though we took our shoes off and waded our way back across.


Craig and Lauren hitting the streets of Bujumbura!

Are plans on track for WBC training? Does this set back make any difference to your original plans?

The set that I did there was the same as my National set, using the same coffee and signature drink. My world set prep is underway. I have got a space in a recording studio and have made WBC spec tables that will stay there with the Nuova Simonelli T3 competition standard machine that Alessandro has sponsored and my grinders. With all the hype of the Mahlkonig EK43, I asked Johan from Gourmet Coffee and PartsHub in CT if he would sponsor one for me to play on to see if all the hype has substance, which I think it will.

Craig was on SABC 3 News last night, he caught it on camera :) And if you want to read more, go to his blog here.