It's the middle of the year and I find myself almost in the middle of the continent doing research for my master's thesis. I left cold Cape Town armed with a dictaphone to record interviews, but without a travel French press. Rookie mistake.

Buying coffee on a per cup basis adds up when you're traveling on a student budget. I was going for about a month to Nairobi, East Africa's fastest growing city and the capital of a country known world wide for its delicious tasting coffee and tea. The British, like other colonial regimes in Africa, rigged up Kenya's pre-independence economy to suit their own needs. Kenyans were discouraged from drinking coffee and tea was made fashionable instead. Colonial legislation also prevented locals from roasting the beans they owned so that the British government could export green beans as a cash crop and capture the value of the roasted product in Europe. The socio-historical effect of this is that Kenyans are by and large tea drinkers (understandably so, Kenya does produce fantastic tea!). In fact, domestic coffee consumption accounts for roughly 5% of total coffee sales while the rest is exported. All of this put together is a roundabout way of saying that it's really difficult and really expensive to find any sort of travel sized coffee making device in Nairobi.

In search of a small French press, I'd gone to various supermarkets across town, emailed Pete Owiti - the first African barista to make it to the World Barista Championships - for advice and was now on to the coffee shop circuit which I think I had subconsciously left until last as I knew this would be the most expensive option to buy from. The Nairobi Java House happened to shelve more than just French presses and included ceramic and plastic pour-over drippers. To my surprise the plastic ones were only R53 – a bargain! Of course the ceramic ones are more beautiful but for travel, a plastic pour-over has great benefits: it's durable, easy to clean and makes a great cup of coffee wherever you are. After a somewhat warm equatorial winter month in Nairobi I come back to cold Cape Town and find myself unwittingly implicated in a new coffee trend to brew via pour-over. Pour-over seems to be the new flat white in this town. Fancy that. Thanks for the heads up Nairobi. 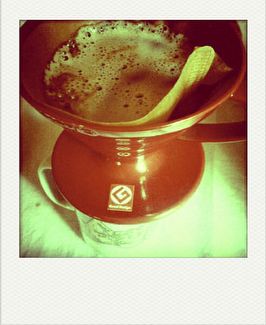 Ps. If you ever do find yourself in Nairobi in need of a good coffee, I'd recommend the following spots: . This is the oldest Java in town as it’s the original one before Java House became a franchise.

Pete's Coffee at the iHub: As mentioned, Pete Owiti is Kenya’s 2004 barista champ so ja, no worries about the coffee here. Also, the iHub is a great place to check out if you’re into technology and startup culture. What happened on your latest caffeinated travels? Please do let us know and share it with the coffee loving community.